Due to the tremendous efforts of our Conference team - Deacon David Reynolds, Lori Stewart, Anne LaMonica, and our exceptional group of lobbyists, we were able to repel every negative attack, promote many positive messages about the work of the church, and make new friends in both the Legislative and Executive branches for future challenges and opportunities.  Our Conference team members were exhaustive in their efforts on every matter. After the 2018 Election, many new lawmakers with antagonistic attitudes toward the Church wasted little time to bringing their agenda’s into action. Given where we started, we have much to be grateful for.

Here are some highlights: 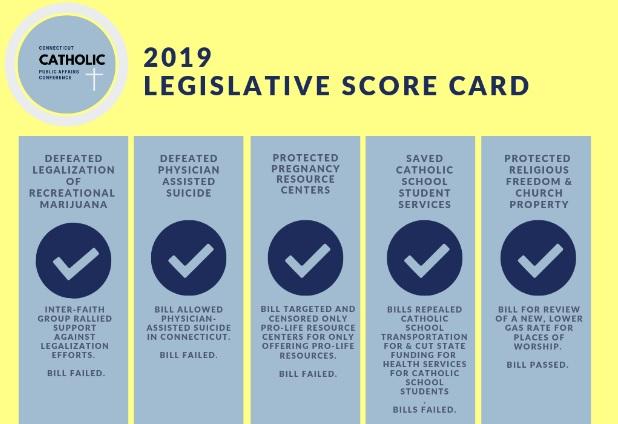 Physician Assisted Suicide - We were able to block this bill from even getting a vote in its committee of origin - the Public Health Committee - again due to the collective efforts of our team and the Family Institute of Connecticut. State Rep. Jonathan Steinberg, D-Westport, the chief proponent of physician assisted suicide, said he does not plan to promote the legislation next year. Again, given the new progressive makeup of this panel and the legislature in general, this was a significant victory.

Pregnancy Resource Centers - House Bill 7070 - The Family Institute of Connecticut, the resource centers, and the Conference worked in concert right up to the end of the session to defeat this legislation from being called in the state Senate. The legislation would have empowered the Attorney General to take direct action against pro-life pregnancy resource centers, which only include those unwilling to offer or refer for abortion services, for perceived acts of misinformation.  The legislation was promoted by Planned Parenthood, the National Abortion Rights Action League and all radical women’s groups. They applied tremendous public and private pressure on Democrats to call this bill. The bill was passed mostly along party lines in the House. Several House Democrats voted against the bill; Rep. Michelle Cook D-Torrington, Rep. Henry Genga, D-East Hartford,Rep. John Hampton, D-Simsbury and Rep. Daniel Fox, D-Stamford. The bill was not called for a vote in the Senate due to opposition by some Democratic Senators, along with all the Republican Senators.  Objectively, this was a notable defeat for Connecticut’s pro-abortion forces.

Adoption Identification - SB 972 - This legislation would nullify confidentiality agreements by mothers who gave up their children for adoption from 1977 to 1983. This was a major issue for Catholic Charities, and we were able to stop the legislation from a vote in the House on the last day of the session. Again, radical women’s groups engaged in this fight, ironically claiming that a woman who has given birth does not have the same Constitutional rights for privacy that a woman seeking to end her pregnancy enjoys. We pointed that out on numerous occasions, and it seemed to wake some people up on the matter. This issue is likely to return unfortunately.

Energy Savings HB 5181 - This legislation was a result of our joint efforts with the Jewish Federation. It will allow for a review to change the rate structure for energy charges, including natural gas, for places of worship. This law was started on behalf of a synagogue in Southbury that has been paying a commercial rate for natural gas, to warm its facility. This could result in savings for parishes across the state if we are successful in convincing the state utility regulators.

Legalization of Marijuana – In January, many believe legalization of marijuana was a certainty.  We worked with members of the Black clergy, parent groups, and drug awareness advocates, to oppose this legislation and it failed. However, it will likely return next year since the financial benefits to the state cannot be ignored by lawmakers looking for revenue.

Expansion of Casino Gaming, Sports Wagering - The Conference opposed this and all legislation that would have expanded casino gaming or allowed wagering on sporting events failed.

Catholic School Transportation:  HB 5142 and HB 6611 were two bills introduced to repeal the state mandate for towns to provide in-town transportation to nonpublic school students. The Conference opposed this, and our network of schools and parents quickly stopped the bill from a vote in committee.

Catholic School Health Services Funding:  The Governor’s Budget Bill, 7150, that would have transferred the state’s share of funding for nonpublic schools’ health services to the nonpublic schools.  Our parents are paying for these services through their state and local taxes already.  The Conference and these motivated parents convinced legislators to restore the state funding language to the bill.  This saved our schools over $3 million.

CHET K-12 Tuition Payments:  HB 5255 sought to recoup state income tax deductions from CHET account holders who used their CHET accounts to pay for nonpublic K-12 tuition.   The Federal Tax Reform of 2017 expanded the meaning of higher education to include K-12 nonpublic schools.  The Conference argued that HB 5255 was discriminatory, and the bill was never called for a vote in committee.

Many thanks for your continued support.